Several stories stick with me from my August trip to Congo. I didn’t write during the trip; there was just too much going on and not much solitude. So, like I do with a detailed dream of which I only remember a snippet, I will honor a few stories that have stayed with me. Here is one.

Three fellow travelers and I spent a full week in the dusty outback city of Tshikapa, in Western Kasai province, where the fourth teacher-training program, sponsored by the Mennonite women of Congo and Africa Inter-Mennonite Mission, was being held. Sixty-one people–many of them educators and pastors–were following an intensive course in teaching illiterate adults to read and write.

It was marvelous. It was rigorous. It went well.

Tshikapa is the provincial capital of the region that has suffered the most recent, excruciating violence in that country. END_OF_DOCUMENT_TOKEN_TO_BE_REPLACED

A blogger friend asked his teenage grandson, just back from 6 weeks in China and a veteran of other international adventures, what made him such a good candidate for future studies in international relations.

“I like people and accept them,” Sam replied. “I like to encounter ideas. I enjoy new foods.  It’s fun to solve travel puzzles.”

Sam is a teenager after my own heart. Right now, as I prepare for my next sally into the heart of Africa accompanied by three friends, it is the “travel puzzles” that are on my mind. END_OF_DOCUMENT_TOKEN_TO_BE_REPLACED

Recently I saw a video clip of Ellen DeGeneris receiving a multimillion-dollar contribution from Ashton Kutcher for her school in Africa. It was subsidized by a company that specializes in quick and easy global money transfers, and so to give the money Kutcher just gave his smartphone to Ellen and told her to push the button she saw onscreen. She did, and presumably the millions flowed instantly and painlessly into the right bank account.

It’s not so easy for us ordinary folks either to drum up millions or, heaven forbid, send it to Africa. END_OF_DOCUMENT_TOKEN_TO_BE_REPLACED

Here is how you get your baggage at Mbuji Mayi. Passengers and guys whom you can hire to retrieve baggage crowd on one side of a low platform and the baggage is carried in through a door on the other side and stacked in a holding area while an agent examines each tag and calls a name. Or number. I can’t get close enough to tell. END_OF_DOCUMENT_TOKEN_TO_BE_REPLACED

Now that I’ve returned from my 15-day trip to DR Congo I’ll be posting more reports. See the “Congo” category on this site.

The Congolese have a sense of occasion, the importance of protocol and doing things right, especially when it comes to programs and celebrations. This places special demands on an introvert like me.

On Good Friday I was front and center in two ceremonial occasions in Kinshasa. The most challenging thing for me as a guest of honor is delivering the expected mot de circonstance, literally, a word about the occasion, presumably fit for the occasion. END_OF_DOCUMENT_TOKEN_TO_BE_REPLACED

In the middle of the week I asked my dear friend Pastor François Tshidimu to do me a favor. Could he buy my ticket to fly to Mbuji-Mayi on Monday? Buying a ticket involves trekking to an office somewhere in this unwieldy city and my schedule was filling up. Yes, of course. He could do this Friday morning while I attended the closing ceremonies for the literacy classes. But he needed my passport.

I had no qualms about giving François my passport and enough money to more than cover the cost of the ticket. END_OF_DOCUMENT_TOKEN_TO_BE_REPLACED

The security line is long and slow. I have plenty of time. A baby on her mother’s shoulder smiles randomly at people. I catch her eye and smile. She smiles back.

After going through security I hold my passport and boarding pass in my hand while I put my jacket back on. As I am walking to my gate I feel something scratchy in my sleeve. It is the boarding pass. END_OF_DOCUMENT_TOKEN_TO_BE_REPLACED 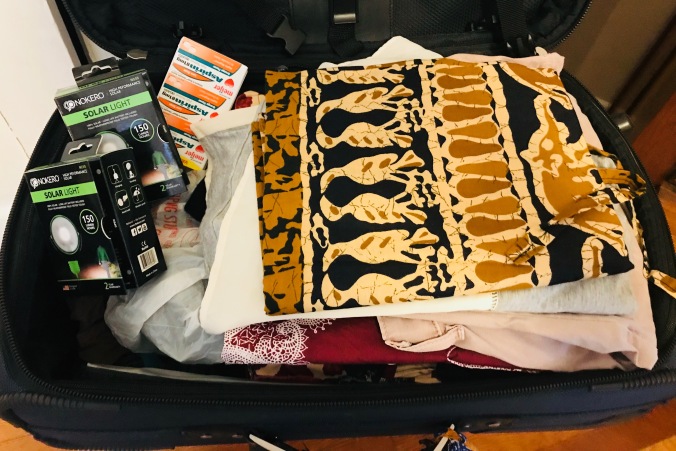 I am pretty sure I will be in DR Congo two weeks from today. My plans have been playing Upset the Fruit Basket (anyone remember that game?) for the last few weeks– canceled flights and more canceled flights, schedule changes there, new plans here. My right knee decided to test my resolve by freezing up ten days ago but then came back online a few days later.

But the uncertainties on my end are minor. END_OF_DOCUMENT_TOKEN_TO_BE_REPLACED

I am just back from a two-week safari (Swahili for “trip”) to South Africa. What can I say? It was impressive and I learned a lot.

Yesterday I pulled aside the curtain of jetlag and looked at my pictures. Animals in Kruger National Park, flora and scenery in Cape Town, and the craggy southern tip of Africa that forms a dramatic end to the continent. Here are a few. END_OF_DOCUMENT_TOKEN_TO_BE_REPLACED

This morning, near the end of our three-and-a-half weeks in DR Congo, I completed my first article about the ordinations I’d come to write about–deadline day after we return– and then I declared an end to effort.

I asked our friend Suzanne to drive us several blocks from her pleasant Kinshasa apartment (where we slept very well last night) to the Jeffrey Travels office, where I could arrange for “protocol” not only for our flight home tomorrow evening but also for the check-in downtown tomorrow morning, which I’d assumed we would handle ourselves.

I don’t feel like handling anything more for a while.

Protocol–procedure–is an important concept here. It has a special meaning when it comes to airports. Hiring protocol service means paying someone to get you to or from the airport and shepherd you more or less all the way to or from the gate. Just how necessary that is was driven home to us yesterday as we prepared to board our flight from Lubumbashi to Kinshasa.

Before arriving in Lubumbashi several days earlier we had signed onto a protocol service because 1) we didn’t know the airport; 2) we were arriving late at night; and 3) we didn’t know how far our guesthouse was from the airport. As it turned out, the airport was a breeze for arriving passengers and our protocol guy (henceforth named Protocol because I didn’t ask his name) met us outside and simply drove us to our guesthouse, 20 minutes away. For this we had paid $100 for the two of us.

We arrived two-and-a-half hours before our 8 a.m. flight. Inside the airport door, three men sat at a table. We asked them what we needed to do because there were no signs. They grinned and said, “Café. Buy us some coffee.” They seemed to be posted at the door exclusively to collect “tips.” We stepped aside and watched someone else pay them a few francs and proceed on his own to the next step, a “check-in” desk on the other side of a partition. We didn’t pay.

We fumbled and inquired our way through the baggage-checking process and then to pay for the “Go-Pass,” an exit fee required at every airport in varying amounts depending on your destination. Someone told us it was $50 each but it turned out to be only $10, plus a $5 provincial tax.

Finally we were motioned toward a ramp, on the other side of yet another partition, that seemed to lead to a boarding area. But we did not yet have boarding passes. These were apparently being issued at several windows alongside the ramp, where people were apparently facing long inquisitions and discussions. A man whom I will call Traffic Control was letting passengers into this area one at a time.

It was still early. Traffic Control told us to wait to one side. An earlier, international flight was apparently being processed. But hardly anyone was going through because it was taking approximately 20 minutes to process each person at the four windows. People were gathering around us on the waiting side of the partition, pushing forward but not going anywhere. But other people were pushing their way through, being admitted by Traffic Control, and sometimes even breezing past the windows.

Some of these people seemed to be on our flight, not the international flight. Some seemed to be accompanied by protocol guys. I made several attempts to ask Traffic Control what was going on, as it got later and later, but he ordered me to “wait until I give the command.”

It was now 7:30, half an hour before our scheduled takeoff, and none of us on the wrong side of the partition yet had boarding passes.

Suddenly I spied Mr. Protocol himself, the guy who had taken us to the guesthouse three nights earlier, leading several people past Traffic Control and up the ramp. A few minutes later, when he hurried back down the ramp, which was now seeming like a stairway to an impossible heaven, I stopped him. “Can I hire you?” I asked.

He looked at us for a second and grinned. “Oh sure. You’re the people I took to Bougain Villa. Come with me.” He led us to the door guarded by Traffic Control, who put his arm out and stopped Mr. Protocol. Protocol expressed shock–he had, after all, gone back and forth with impunity several times minutes earlier.

Traffic Control, however, was not about to lose face by letting some pushy foreigners through whom he had just ordered to wait their turn. He jammed his arm across the doorway. The volume of his argument with Protocol attracted the attention of several security officers further up the Stairway to Heaven. They descended and joined Protocol in trying to dislodge Traffic Control, who refused to budge.

Finally, several men wedged themselves between the fuming Mr. Traffic Control and one side of the door, making a small opening for us to slip through. We were hurried up the ramp to the still sparsely populated Heaven, the boarding lounge.

Protocol had our passports, tickets, and hard-won Go-Passes. To our consternation he headed back down the ramp and into the crowd. But at that point we had no choice but to wait. And trust him.

We discussed whether this was another mistake, how the authorities would manage to process all the waiting passengers, whether Protocol would ever reappear, and how much we should pay him if he did.

Ten minutes later Protocol breezed by with more passengers, nodded to us–“Patience!”–and accompanied them out to a waiting aircraft.

Fifteen minutes later Protocol reappeared, all smiles, with our passports, Go-Passes, tax receipts, and tickets bearing the stickers that served as boarding passes.

I resisted the urge to hug him. I asked how much he would like for his services.

“Nothing,” he said. He didn’t even say the usual, “whatever you would like to give me.” Just, “Nothing at all.”

He asked why we hadn’t called him to take us to the airport. We explained that the arrival had been so easy that we thought we could handle departure by ourselves. He laughed. “The departure is something else.” He wished us bon voyage and disappeard back down the ramp.

Suddenly the lounge began filling up. Some bottleneck in the boarding pass area had broken. All the madding crowd seemed to make it on the plane, which left less than 30 minutes late.

But I didn’t regret asking Protocol to help us. My do-it-yourself days are over when it comes to Congo airports.