This morning we visited the hospital where our daughter was born almost 41 years ago.

I don’t feel any attachment to the hospital where our son was born two and a half years later. I suppose I could visit Kaiser’s big hospital in Cleveland any time I want. Maybe that’s why it’s not special. On the other hand, I never really expected to get back to our daughter’s birthplace.

But there is more. The “accouchement”, the birth process, here at what used to be called St. Elizabeth in Lubumbashi, DR Congo, was more personal and humane than the factory rush-through of standard American maternity care. It was more like giving birth at home. Your family was expected to do the newborn’s laundry, for instance, and your stay was as long as it needed to be. In my case that was eight days, which took us to the date my mother and father came from the US to visit and help out.

It was a pleasant eight days in a spacious, high-ceilinged room with lots of windows and my tiny daughter beside me in a crib. She was only 4 pounds 10 ounces but a midwife pronounced her healthy and said no incubator for her. Indeed, she thrived and quickly gained weight.

The hospital was run by Belgian nuns and a few Belgian doctors, which is why it was known as “the hospital of the whites.” Most of the patients were Congolese. Most white women in Lubumbashi went to the better equipped clinic run by the copper mining conglomerate Gecamines. I thought St. Elizabeth’s was good enough for me and it was.

We couldn’t find the hospital on the map we picked up of Lubumbashi on Tuesday, our first day here. We found out it was now called University Clinic but still remembered as the hospital of the whites. Today the maternity director said she saw its real name only recently on a document.

And then she pulled out old record books, some marked “Congo Belge” and others marked with the year. 1974. 1973. And 1971-72. She opened this one and ran her finger down the lists until she came to 1/11/1972 and there we were. Born at 6 a.m. to Mme. Myers Eash Nancy of UNAZA (Université Nationale du Zaire) a female, 2.1 kilos, first baby, mother aged 29 (actually not quite), vaginal birth with episiotomy. The doctor is listed as Dr. Houtaine, but it was actually a midwife who delivered her because the doctor didn’t get there in time.

And then the director took us to the room where I had spent those first 8 days with my daughter. Another mama was there with her tiny infant. The light streamed in through the tall windows. I got all teary. 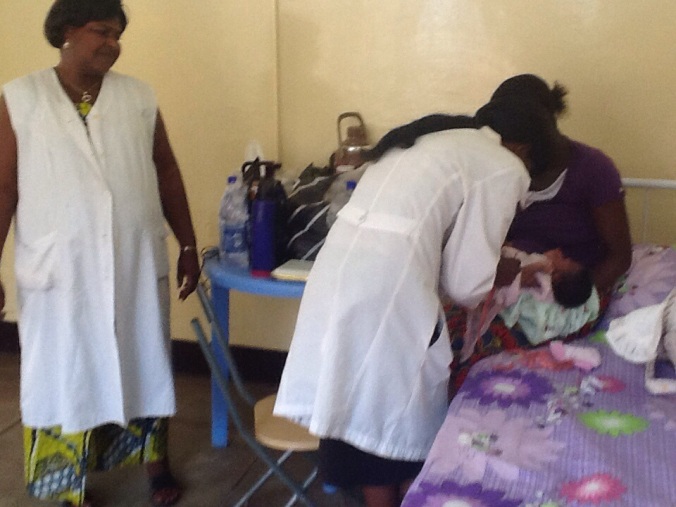