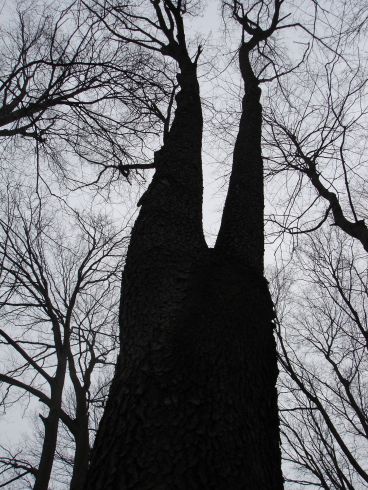 I was annoyed. My back was still giving me angry twinges despite everything I had done for it over the past weeks—pampering it, not pampering it, ignoring it, talking to it, medicating, hocus-pocusing, stretching, relaxing, strengthening. And then my sewing machine was acting up, turning a creative project of making doll clothes into a chore.

It was midafternoon and I realized that I had not yet done my daily Centering Prayer meditation. Rather than sit at my desk, as I have been doing since I started the practice two months ago, I made myself get up and walk into the woods to my special tree. My mood improves whenever I spend time with the tree, though for some reason I am always reluctant to test this proposition. I had not paid a visit to the tree for several months.

Rather than sit on the cold ground at the base of the tree I perched on the branch scar that juts from the trunk several inches off the ground. Immediately my mind became a blank slate.

I don’t know how to draw the line between excessive self-awareness, which nullifies the point of Centering Prayer, and true appreciation of the experience that this kind of meditation can bring. The prayer is an opening, an invitation, and sometimes things happen because of that opening.

Up to now the happenings have been subtle changes in my daily life and how I respond to events: an emerging sense of both purpose and contentment with the present and what comes, a deeper patience with myself and with other people. I haven’t experienced much, or expected much experience, during the meditation itself. The point is to be open, to train yourself to let go of everything the mind brings up, including expectations. The only palpable result I have noticed during the meditation has been an easy, calm, blank peace.

For a number of years, as I have written before, I have experienced this particular tree as a prayer companion, a meditation preparer, an energy field that somehow connects with me. But I had not been to the tree since starting a Centering Prayer practice. The difference this time was palpable.

What happened that afternoon at the tree was too powerful to ignore. The sense of peace was so strong that it vibrated in my core. The interval between distracting thoughts was so long it was as if the thought-manufacturing part of my mind did not exist. My earlier irritation not only dropped away; it receded so far that it seemed as if I would never feel that way again. After 20 minutes I walked back to the house elated and refreshed.

This experience was not qualitatively different from what has happened to me at the tree before. The difference was quantitative. I was far more sensitive and receptive to it than I had been before practicing Centering Prayer. The daily meditation had trained my sensibilities, opened me to this visceral experience of an unseen and indescribable reality, this tree—these trees—and my connection to them. It was as clear a before-and-after experiment as I could have engineered if I had thought about it (my tree experiences before the Centering Prayer practice and now). I didn’t think about it. I didn’t expect it. And it was therefore all the more remarkable.

And then, just as I was thinking this kind of experience was particular to the tree, something similar happened in church yesterday. I was more present, more aware, more moved by everything that unfurled in the worship service and my encounters with the community. In the beauty of a sanctuary adorned for Advent, my attention was riveted, my sensors tuned high. It was like church in HD.

A central purpose of Centering Prayer, as Cynthia Bourgeault describes it in Centering Prayer and Inner Awakening, is to learn to use “those more subtle perceptivities of spiritual awareness—the “spiritual senses,” as they’re known—to see and taste the presence of the divine as it moves fully in and out of everything.”  I think it’s working.