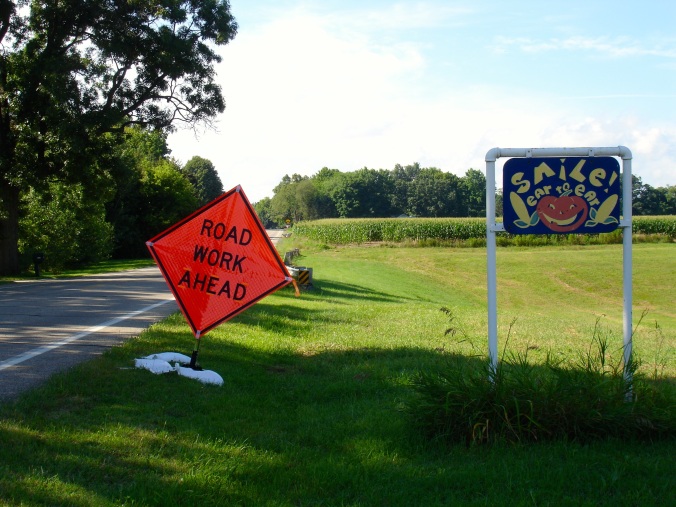 “Road Work Ahead,” the signs say. They make their first appearance a mile and a half from our house in the woods.

I walk down to take a picture. The “Smile Ear to Ear” is for our nearby farmstand, where sweetcorn is also making a first appearance.

Smile. Be happy. A corridor marked with party flags has been laid out through another neighbor’s strawberry patch. 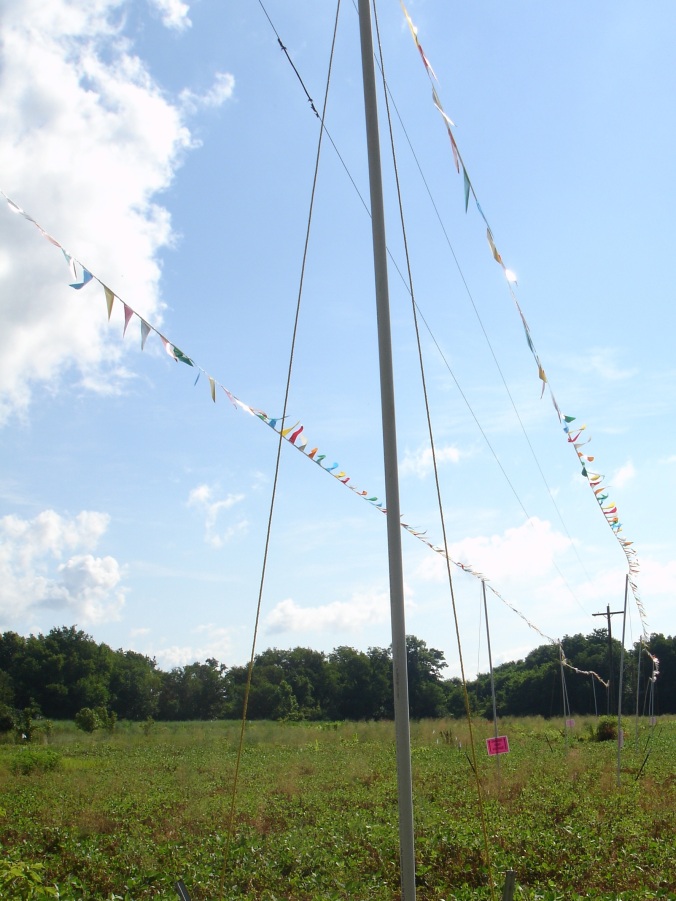 But this is not about our country roads, which are always in need of repair. It is not about parties or backyard festivities.

A mile farther east, the nature of the “road work,” the activities taking place in our neighbors’ backyards, becomes clearer.

A crane pokes up behind a flowerbed.

A ridge of dirt rises a few yards beyond the shade trees.

A “road” is being carved through cornfields.

The trucks, the heavy equipment, the port-a-potties, and the pipe show up another mile further to the east.

The “road” is for the Enbridge Pipeline, which is being laid to carry oil from the Alberta tarsands to the east coast of the USA.

This is not a new pipeline path. We already have a pipeline under our feet, under our corn and vegetables and horse pastures. That pipeline went in less than 20 years ago. Three years ago it leaked and created the worst spill ever in a body of fresh water, the Kalamazoo River, 50 miles away.

This new set of pipe is supposed to replace the leaky line.

Until it, too, leaks, I guess. Or until the oil or our appetite for it runs out, i.e. not any time soon.

I saw that earlier pipeline being laid back in the late 1990s but I didn’t know–I didn’t think about–what it was. I was not curious. It was one of those big infrastructure things.

But meantime I spent a dozen years working in the environmental movement and I learned to notice such things, to think about what was in front of my eyes as well as hidden under my feet, and why these things are there, and what the consequences are and can be.

Such thinking is inconvenient for the powers that be, economic and political. So they call it road work. They pay a few dollars compensation to people whose backyards and farms and vegetable patches are being torn up and hope they’ll stay calm about it all. Most people do. Most people really need the money.

A notice appears in our township letter: “Bertrand Township is eligible for a $15,000 Enbridge Environmental Stewardship Grant. We are looking for volunteers to participate on an ad hoc committee for how to use these funds.”

I call up and volunteer for the committee. I call up a local conservation organization and tell them to start thinking about a proposal for spending Enbridge guilt money.

It’s a pittance, but hey. We can come up with a party to go with all those party flags. A party for the trees and the toads while we try to remember what is under our feet.

20 thoughts on “The pipeline cometh”