Yesterday I experienced reverse culture shock. We’re back home and we went to church.

We had been to church four consecutive Sundays in Congo. Two of those Sundays were major, five-hour services celebrating the ordinations of women and men. The weather was steamy. Crowds milled and were often noisy. There were multiple sermons and exhortations as well as a great deal of pomp and ceremony.

These services were in many ways ordeals, tests of our endurance, to say nothing of the endurance of the ordination candidates.  They were clothed in black, neck to toe, and they were robed in yet another layer of ceremonial clerical cloth during the ceremony. The ordinands had also spent the previous night sleepless, in prayer. They were facing the audience and you could see some suppressed yawns, dark circles under the eyes. Babies slept, woke, nursed, played, slept again. After the ceremonies at least one of the new reverends got sick. She was still recovering three weeks later. 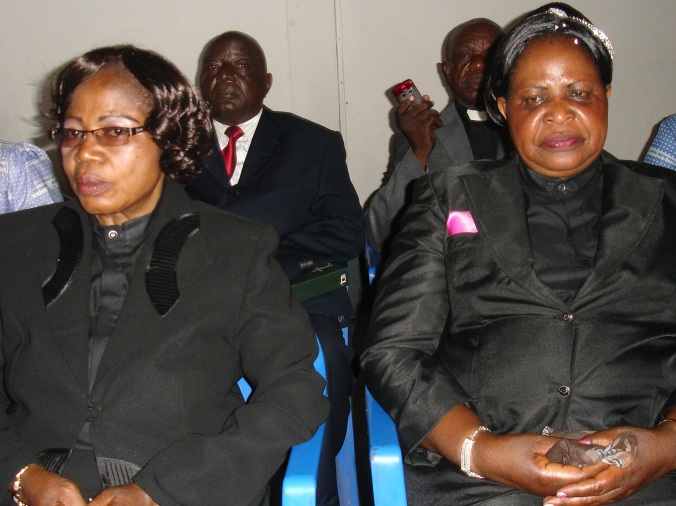 Ordination candidates Ngombe and Swana, backed by their husbands

And yet I would have to say that, while those services were too long, they did not seem like they were five hours long. That is because they included lots of wonderful music. The music invited dancing, clapping, moving around. And it was really good music–practiced, perfect harmonies in pure, high-volume blends, mostly a cappella, sometimes with drumming. It was original music, or original adaptations of familiar hymns and gospel songs, hyped up with sophisticated rhythms that made you want to move. The congregational singing was as energetic and harmonious as the choir music.

The other two services were more or less ordinary church, but with the same, music-boosted energy. One went on for three hours but that was partly the fault of us visitors. One of us preached and the other five were invited to say a word, and it all had to be translated. The other service flew by at a mere hour and a half? Two hours? I didn’t check the time.

Now. I am not looking to duplicate that worship style here at home. My faith heritage comes in an entirely different mode. I love Mennonite four-part a cappella singing where everybody reads the music lines in the hymnbook and gets them right, no improvisation. I love the envelope of peace that wraps me in a quiet service. I do love a good, short, thought-provoking sermon.

Yesterday back at home church the crowd was a bit sparse when it came time for the first hymn. It was a unison hymn, and not very familiar. We sang it too quietly. I heard myself struggling with the notes. I realized I had gotten used to being carried along by group singing energy, even drowned out, willing to cast my voice out with the multitudes at the highest volume possible. Here I was sticking out like a sore thumb in isolation.

We were greeted quietly by the worship leader. No “Alleluja!” “Amen!” call and response. Of course not. We don’t do that. Not that I wish we did. The sermon was good, and thoughtful. The audience listened attentively, responding when asked but not out of turn. We were our reserved, well-behaved selves.

The service was one hour and a quarter, edging toward an hour and twenty minutes, and I was ready for it to be done when it was.

I love this church, and I really love it as a community. I know I could find livelier worship styles in other churches here but I’m not going out looking for them, let alone try to impose them on my church. Still, I really miss that joyful energy of my Mennonite sisters and brothers in Congo. 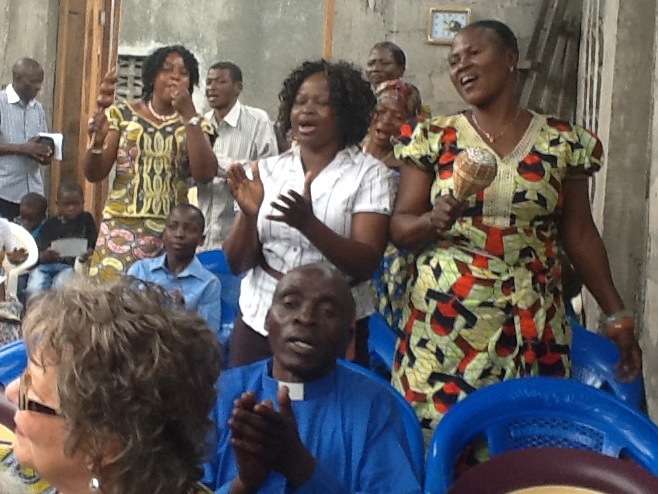 One thought on “Church culture shock”