It was not a good morning. First there were the reminders of my late beloved kitty-cat, put to sleep yesterday after 19 years with us. As my daughter said, that’s as long as raising a child and, indeed, I was experiencing empty-nest syndrome as well as grief this morning. Little stutter-clutches at my chest as I poured milk in my tea and didn’t pour any for Lalo, started the vacuum cleaner and momentarily worried about scaring him, hesitated before I set my laptop down on his favorite chair by the woodstove.

But losing a kitty is a small thing. Two of my brothers were hospitalized over the weekend. They are more or less at opposite ends of the country so there was nothing to do but pray for them.

I was going to write about all that in my journal this morning but I clicked on this month’s journal doc and got the spinning colored disc. No go. I noticed a strange insert before the beginning of the Word doc, a phrase about an HTML something with a box and other characters. I couldn’t delete it, couldn’t do anything in the doc. I soon discovered that I couldn’t do anything in Word, period, so I did the force-quit thing that always works and it didn’t work. And restarting my computer didn’t work. And I couldn’t get rid of the offending document.

I need Word. I am a writer. I do all my writing in Word. I have no tolerance for helpline calls–I always end up feeling confused and stupid–so I went online and made an appointment at the Genius Bar of the local Apple store. I’d much rather face a techy in person than on the phone, even if I have to pay.

I scheduled the appointment for after yoga and exercise at the Y, which I needed badly. The distress of Lalo’s last weekend and yet another blizzard yesterday afternoon had kept us sedentary for three days. Last night the neighbor had taken a turn around our long loop drive with his snowblade. My husband left early this morning for his three days at work in Chicago. He said he wasn’t sure how well the lower drive was plowed.

I backed up my laptop, tucked it in a bag, grabbed my gym bag, and headed out. I was pretty sure I could get down the lower drive because it’s downhill and my car has 4-wheel drive. But I didn’t. I got stuck right next to the backdoor. I shoveled and tried, shoveled and tried, shoveled for a full hour, jabbing at the snow packed under the car and around the wheels, exhausting myself, soiling my down coat against the dirty car–the coat I’d washed yesterday because poor Lalo had peed on it as we drove to the vet; he always hated the car.

I did get my exercise though it was anything but yogic. But friends, I confess, I had a giant pity party for myself. I gave up and wept. And then I called my husband, who did not offer to turn around and drive 100 miles to my rescue. He had a few suggestions, none of which I had the energy to implement.

But I regrouped. I made tea. I fortified myself with the only comfort food in the house (something sort of like a hotdog but made with low-fat chicken, not all that comforting) and sat down with my laptop again.

At that moment one of my hospitalized brothers called on his cell from the ICU. He sounded way better than I thought possible, given the reports I’d been getting from my sister-in-law. I also learned the other brother is home from the hospital. This good news put my little snafus into perspective.

I made another attempt to sneak around the offending Word doc. I opened it with a different program. The strange phrase disappeared in the new version. I trashed the corrupted doc and emptied the trash. I opened Word and lo and behold, it worked. Phew. I cancelled the Genius Bar appointment, which I couldn’t have kept anyhow.

My friend Janie just posted a link on Facebook to this article, The 9 Essential Habits of Mentally Strong People. “Instead of getting upset, feeling hopeless and giving up in the face of obstacles, they take the opportunity to put on their thinking caps and come up with a creative solution to the problem at hand.”

Can’t say I didn’t get upset but I did solve one problem. Now if I can just get the energy to carry water softener salt up from the basement and pour it all around my car. . . . Or maybe I’ll wait for the neighbor to get home from work and come to the rescue. 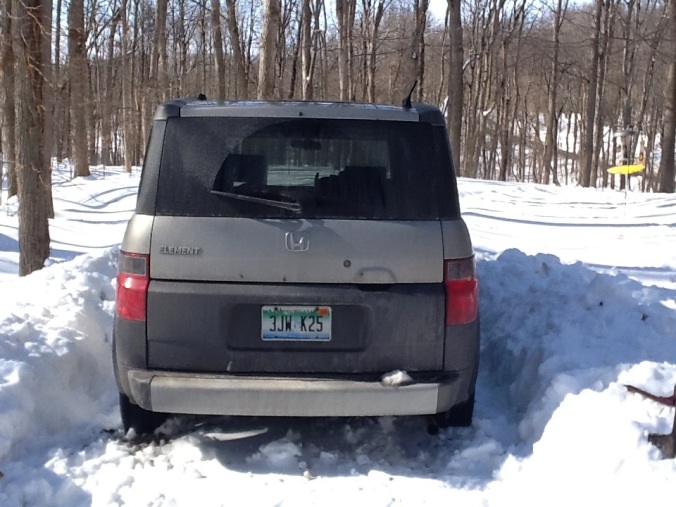