A year ago, in the middle of a winter as vicious and snowy as this one, my friend Dawn and I made an agreement. She would retire from her job at the end of December 2014, and, as soon after that as possible, we would travel together to somewhere out of the country. Somewhere warm.

This trip would be no simple jaunt, however, because Dawn has multiple sclerosis. She was diagnosed only five years ago and the disease has progressed rapidly. A year ago she was walking with the aid of a walker. Now she gets around with a motorized scooter and can only manage a few steps with a walker

Dawn is even more of a world trekker than I am. We met four decades ago in Congo (then Zaire). Her work has been in international educational exchange. In 2006 we traveled to Japan together. But, partly because of her condition, she hadn’t traveled internationally for several years and she was missing it. I was missing Dawn’s company–we don’t live close together–so an international trip of some kind, with me providing whatever assistance she needed, seemed a good way to renew our friendship.

When it comes to travel neither of us likes group tours, but we didn’t really know what would be involved for Dawn to travel in her condition. So I began the research by googling “vacations for disabled.” Near the top of the list were some companies that arranged disability tours in South Africa. Neither of us had been to that country. It involved a very long plane trip but otherwise seemed promising. We investigated further and signed up with Epic Enabled for eight days in Kruger National Park and four days in Cape Town. We got back last week.

We would never have been able to do this without the expert help of the tour company. On the other hand, the tour leaders can only offer so much assistance. Anyone with significant disability needs at least one traveling companion, so disability tourism is a good gig for these companies: in return for serving the disabled, they also get any number of (paying) able bodies in the tour group. Our group of ten included three persons with disabilities and seven traveling companions. Eleven-year-old Antoine, who has muscular dystrophy, was accompanied by his mother. A German dad brought his wife and grown son and daughter with their partners. The muscular, ex-military son did all the heavy lifting for his paraplegic father.

Alfie, the tour director, told us that one reason he turned to this niche, after twenty years of leading backpack tours, is that it is more or less recession-proof. His clientele is primarily European and these countries offer substantial support to people with disabilities. Well that’s nice. Wish we could say the same.

What the tour company can do is offer accessible transport, lodging, and experiences. This one scored high on experience and somewhat mixed on transport and lodging.

Our transport in the national park was a Mercedes truck converted to a safari bus with rollup plastic side windows and a lift. It worked well. And viewing wild animals is the ideal accessible experience; you have to do it from a vehicle anyhow. Our safari bus was just a bigger version of what the regular tours offered, and with the lift. 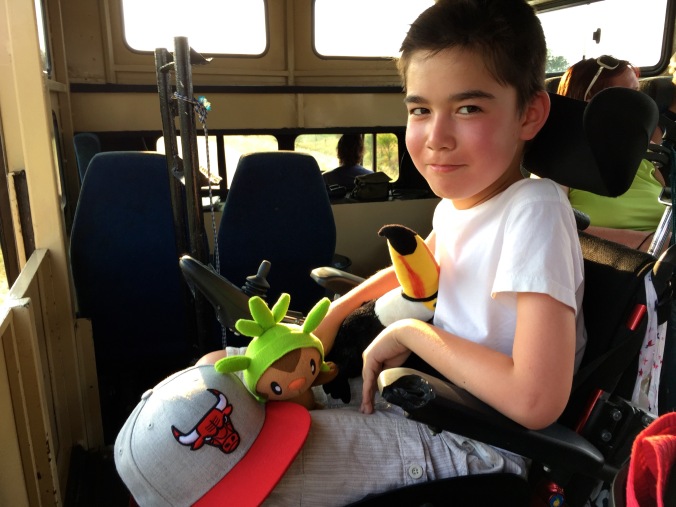 Later, in the Cape Town area, when Dawn and I were the only clients, we traveled in a car or van and Alfie or I pushed Dawn in a wheelchair when we got out. That worked well except one afternoon, when Dawn and I were alone, a walking route that was supposed to be accessible turned out to have some high curbs. A security guard at a nearby hotel helped us.

We didn’t have her scooter on that part of the tour because we had hit a transport snag. Although we had made arrangements ahead of time, Mango, the domestic airline that flew us from Johannesburg to Cape Town, refused to take Dawn’s scooter unless we disassembled it. Neither of us knew how to do this. After some panicky moments, we asked the concerned but rule-bound Mango personnel if they could store the scooter safely until we returned to the airport four days later for our flight home–since we knew Epic could provide a wheelchair in Cape Town. So the scooter was stashed in a tiny storeroom with cleaning supplies, with many assurances that it would be just fine. This turned out to be a blessing in disguise because our hotel room in Cape Town was way too small to accommodate a scooter. When we retrieved the vehicle on our return trip there was a bottle of cleaner and a dirty rag in the front basket but no real evidence that the cleaners had used it to run around the airport.

Mango proclaims itself accessible to the disabled but, like other agencies and companies, has a limited view of what this involves. Mango has an elaborate setup for getting people with disability into the planes, which normally board with a staircase from the tarmac. Dawn and I were elevated into a large, hydraulic-lift vehicle, which was driven around and positioned against the aircraft door opposite the one with the staircase. We were given seats in the front row but not on the aisle because, well, those were for people who could help in an emergency. 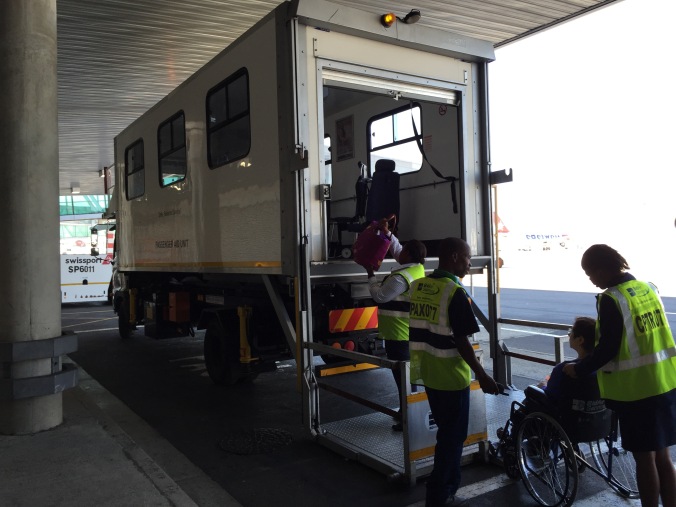 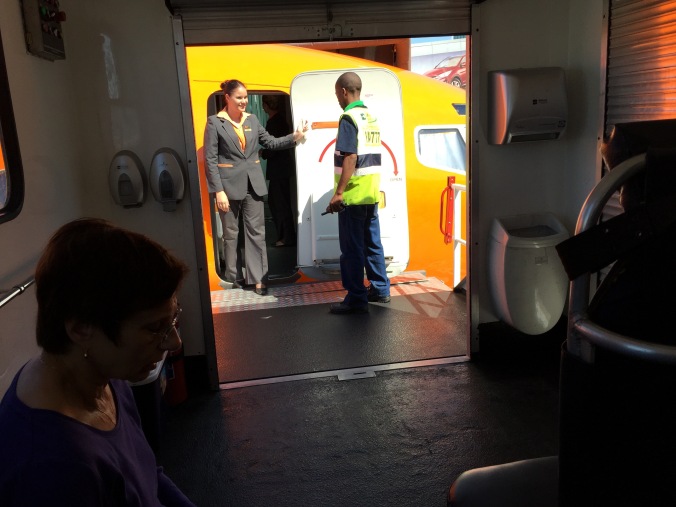 All airlines provide lots of help getting you onto a plane. I don’t know what happens if you can’t get to the bathroom on your own, however, since the narrow aisle wheelchairs that take you to the seat don’t seem to be kept on the plane. Fortunately, Dawn could make the trek to the loo with her walker. This was very important on the 15-hour international flights

Where the handicap bathrooms are–that’s another thing the tour director has to know when you are on long drives. In South Africa they are separate, and not all public facilities have them. More than once we had to wait outside a closed door, and then a person with no obvious disabilities emerged from the special room. I will never again use the handicap toilet!

The “accessible” hotel rooms–in the national park these were charming round huts with thatched roofs called rondavaals–were, indeed, accessible. That is, you could get in. They had ramps to the rooms and walk-in showers. But after that, the definition of accessibility varied. All of them seemed to be located about as far as possible from reception and shopping areas. Bathroom floors were slippery. Handhold bars were few and far between. Beds slid when you sat on them. Consequently, in the first day or so, before either Dawn or I realized how challenging unfamiliar surroundings could be, she took a few scary falls. I felt terrible about that and began to watch her like a hawk, trying to anticipate difficulties. I’m sure that was sometimes annoying. There’s a fine line between helping and hovering.

We learned that travel can make a disability many times as challenging as it is at home or in familiar territory. And the unpredictability of facilities, conditions, and terrain, as well as one’s increased dependency, adds stress. Stress and temperature (most afternoons were hotter than we anticipated) can temporarily worsen the symptoms of MS. No two disabilities are alike, and one must know, or learn, how to handle a particular condition in the best or worst of circumstances. We didn’t know how much we had to learn. But over the two weeks we learned.

Was it worth it? Oh yes. Teetering at the southern tip of this glorious continent with my friend; relaxing in the African evenings on the porch of our rondavaal, under the sweep of the Milky Way; chatting in French and English with new friends over glasses of good, cheap South African wine, I thought, yes. A thousand times yes. 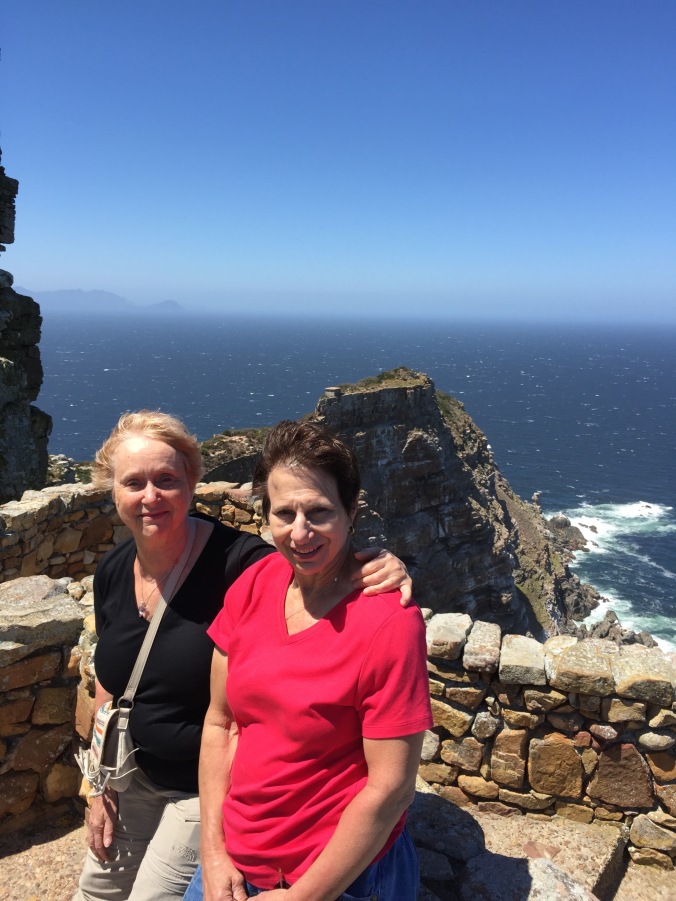