Ndjoko Punda in 2013. It is now overrun by violent militias.

I hear this question and ask it myself every time I hear or report news, often very personal, from this country that I love so much. The news is horrible. Chaos has descended on sections of the country. People are suffering dreadful loss and persecution. Thousands have fled their homes and are hiding out in the bush, homeless and starving. Unknown numbers have been slaughtered in the most gruesome way, uncanny echoes of all the worst outbreaks of violence that have plagued this part of the world in recent history. (Dismemberments, babies being ripped from wombs, beheadings of parents in front of children, killings of whole families, kidnappings, tribal wars.) And in “recent history” I include colonial history. Congo was born in torture wreaked by the Belgian megalomaniac, King Leopold, and his minions. The violence has hardly ever stopped completely in the last century. It diminishes and then flares up. (David Van Reybrouck’s powerful, readable Congo: The Epic History of a People is the best introduction to Congo’s past and present.)

It is significant that the Catholic bishops who have been trying to broker a solution by prying loose President Kabila’s stubborn, corrupt hold on the government recently called on the Congolese people to stand up and take control of their own destiny. Ultimate solutions will come not from foreign intervention but from the Congolese themselves.

My involvement with the country in the last five years has conditioned me to look at the personal rather than the political, at relationships rather than benevolence, at ways to support rather than intervene.

Still, even when you narrow down the atrocities to a single personal story it seems overwhelming. Here is one that came to me via email last week.

Adolphine Tshiama is the “Mama Présidente” of the women of the Mennonite Church of Congo. I first met Adolphine in 2012 when I attended the centennial celebration of that church at its headquarters in Tshikapa. I would remember Adolphine, who is assertive, loud, and energetic, even if I had not encountered her in every trip I have made to the country since then. We have become close friends in the past year. 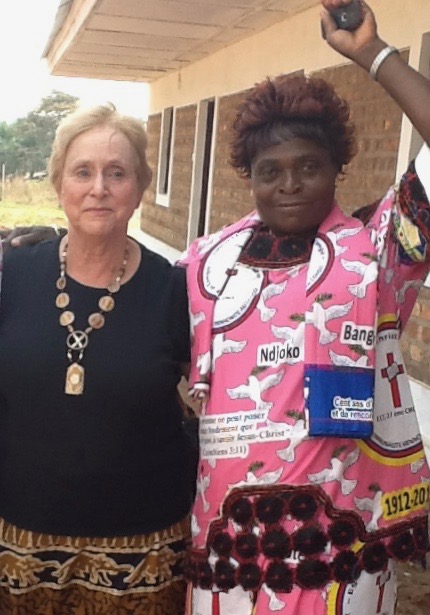 Tshikapa, which I have visited three times, is at the edge of some of the worst violence in the Kasai region, which has flared up in the last year.

Before Adolphine’s husband passed away some years ago, he bought agricultural land 40 miles from the town, downriver toward Ndjoko Punda. (My husband and I made a memorable river trip from Tshikapa to Ndjoko Punda in a rubber dinghy in 2013.) The rural region is inhabited by a different ethnic group. This was not a problem until this most recent descent into chaos, which has stirred up old tribal rivalries.

Adolphine’s younger brother was farming Adolphine’s part of the land after her husband’s death, living there with his family. Some months ago the farm was attacked by the rival group and Adolphine’s 24-year-old nephew was killed, leaving a widow and two children.

Then, in the middle of June, the attackers came back. This time they killed the rest of the family–Adolphine’s brother, his wife, two daughters, and the son’s widow. The widow’s two young children were taken and have not been found. Adolphine says her brother’s body was “dismembered.”

Prayer and love. We Americans tend to think first of financial help (or political solutions), but prayer and moral support are essential and valued in highly spritualized Congolese culture. I and others have put Adolphine’s tragic story out on the social networks. As a result, many people are praying for her and have expressed their condolences. We convey this to Adolphine and it means a great deal to her. Knowing you are not alone is important.

Financial support. In the case of Adolphine and her community, there are also two significant channels for financial help–one short-term and one longer-term.

I will write about these in my next post.

2 thoughts on “How can we help Congo? Part one”