A few days ago I learned that the community On-Site Prayer Ministry was scheduling a vigil at the location of the shooting of Traychon Taylor, the one that took place practically in our backyard a few weeks ago and that I’ve written about here and here.

Since I’ve been doing my own vigil in my backyard rather sporadically (I’m easily discouraged by weather), this seemed like a next step in whatever might be unfolding. I looked forward to it. Meanwhile, I did meet another relative of Traychon’s who came by the memorial tree one afternoon when Vic and I were working in our backyard. She was an aunt. She seemed in a hurry so I only offered condolences and asked her to pass them on to Traychon’s mother and girlfriend.

I believe family members are notified and encouraged to come to these community prayer vigils. I hoped someone from the family would show up yesterday afternoon. I don’t know what I expected if that  did happen except that personal contact seems important.

As it turned out, no one from the family came to the vigil, which was held right next to our house, at the opposite end of the parking lot from the memorial tree. I don’t know why we didn’t gather around the tree or at least take notice of it. We were nearly on-site but deliberately, it seemed, removed a bit. I had to think about how these gatherings were an attempt to address the larger problem of violence in the city, and not just a single tragedy.

It had been raining off-and-on all day and it started to rain again as we gathered. I dashed back into my house for an umbrella and by the time I rejoined the circle of 15-20 people, the leader had begun a litany, which we read from dampening sheets of paper. There was a space for individual prayers which, in the outdoor setting, I had trouble hearing. It was over soon, maybe because it was raining, though the rain stopped and the sun came out soon after the last “amen.” I thought it hardly qualified as a vigil because it was maybe 15 minutes start to finish. Vigil implies waiting, watching. Maybe storytelling? At least time.

Afterward I invited two women I’d met once before to have tea on our porch. No, no they had to get home. . . . But I persisted and Clara and Emily came and stayed for an hour, chatting about this and that, nothing profound—-we didn’t talk about Traychon or violence or prayer. It satisfied my desire to have something come of this. Face to face contact with somebody. And time. Just a little slowing down. 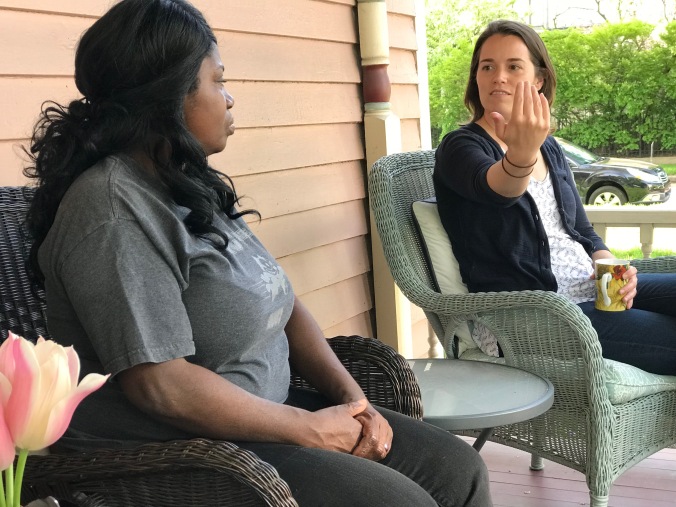