Sometimes I experience the Christian season of Advent as an artificially imposed waiting period. Like, you will get Christmas if you sit quietly for four weeks. Let’s all patiently wait for the Baby Jesus to be born though this actually happened several thousand years ago and we go through this every year. This season of waiting, of course, is completely countercultural. We are surrounded with Get ready! Buy now!

This year, however, the decision to sponsor an asylum seeker has given new meaning to Advent as a waiting period. When we first agreed to do this we were told that “Ben” might be sprung from the detention center in a matter of days, weeks, or even months. That means, of course, that you prepare for “days” just in case.

Just in case he got here before the family arrived for Thanksgiving I cleared out the green bedroom, which I’d planned for Ben, and readied the third floor area for the family that usually uses the green bedroom. Clearing out the room meant putting the toys elsewhere. But Ben wasn’t here by Thanksgiving so the family used the green bedroom as usual, and when I stripped the beds after they left I saw that Hazel had repopulated the emptied shelves with dolls. Maybe I’ll leave them there to greet Ben. 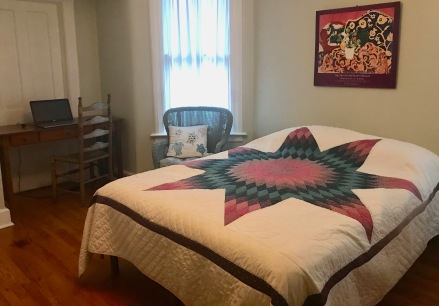 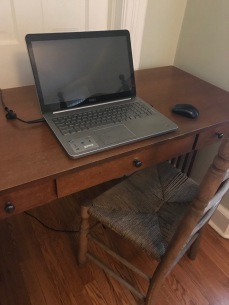 In case Ben got here last week, we arranged to bring him with us to a Christmas party. “Where’s your guy?” the hostess asked us Saturday evening. Not here yet.

We get readier and readier. We now have the room all set up, including a nice $25 desk Vic found at a Goodwill and a computer he recently replaced because it was too slow for his purposes. We’ve looked into phone plans and a friend is donating a phone. We have some warm clothes ready.

Sooo. Where is Ben? Days have turned into weeks and may yet become months.

Ben, of course, is the one who is really waiting and should be more on edge than I am. All the documents and then some have been submitted. Everything is in the hands of the lawyers, subject to the whims of Immigration officials, the decision of judges. It may be this week or next week, he has been told several times over the past months. He has also been threatened with deportation if he couldn’t produce certain documents (which he obtained). The law keeps changing. Anything could happen or . . . not happen.

From what I can tell through our nearly daily phone conversations, however, Ben is patient and in good spirits. In the respectful African manner he calls us “Mum” and “Dad”, asks after our health and the wellbeing of our family. He reports the plots of the novels he is reading, says he’s trying to learn Spanish, reports playing basketball, soccer, ping pong. He says he likes to cook and is very good at making omelets and chapatis and he can’t wait to cook for us. He wanted to know the exact composition of our Thanksgiving meal. “Ohhh, potatoes! I like potatoes so much!” They, too, had a special meal at Thanksgiving, with “a whole piece of meat.”

The other day Ben said he had good news. I hoped to hear that his release was imminent. Instead, the good news was that a fellow detainee had just got his walking papers. To Ben, this seemed like a miracle, a reason for hope. It can actually happen.

One thought on “Wait for it”