Last Thursday afternoon, hours after I’d posted the latest update, word came that one of our three asylum seekers in detention had just been released on bond. “Our”refers to the two other South Bend couples and ourselves, sponsors-in-waiting for three African asylum seekers who have made much of the journey thus far together and have been in a detention facility on this side of the Mexican border since October.

The one released happened to be the one who was perhaps suffering the most from the whole experience, struggling with his mental health. Thank God. Truly a miracle.

Southwest Airlines is flying parolees free of charge, standby. A pastor at the border has been helping with these arrangements and other reentry logistics, and they can take a few days. Last evening his sponsors met him at Midway in Chicago.

While this is a good sign that the ICE-jam on paroles is actually breaking, one never knows what will happen next. Therefore, we sponsors were concerned last week when the other member of the trio (not our Ben) began counting on getting released on Monday (yesterday). But—miracle number two–his instincts were right! He, too, got bonded out. Friend Number Two will be released today as soon as his sponsors transfer the bond money and will fly to them on Thursday.

We decided last week not to put our plans for this week on hold in anticipation of a release. Our plans were for a leisurely trip by train to the DC area to visit a friend. So that is where we are now. We have plenty of distraction. Everybody is trying to stay calm and live in the present. 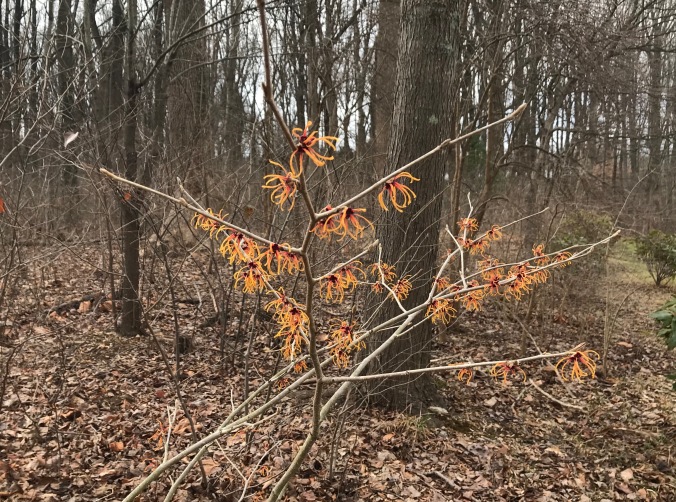 Sign of spring: witch hazel in a woods near Washington, DC.