On Monday at Chicago Midway airport we greeted “Ben,” the long-awaited asylum seeker we’re sponsoring, wrested from detention after more than four months. It was in the nick of time. That center near El Paso was being emptied out in preparation for a whole new batch of refugees coming across the border from Mexico. Hundreds of the previous detainees were being sent to other centers around the country. A few were being paroled. Ben got bonded parole.

Before his welcome party scheduled for tonight, just four days after his arrival, the first cases appeared in our area.

The stock market crashed and burned and lurched around, as my investor husband watched.

Schools closed. “Social distancing” became a thing and we all learned to wash our hands.

Yesterday we bought tickets for the big production of Lion King just around the corner from us. We hoped the theater would still be open by next Tuesday. A few hours later the governor announced a ban on gatherings of more than 250 people and the production shut down. “Postponed,” they said. Hold onto your tickets.

This morning Ben and I went to church to rehearse a scripture drama we planned to do this Sunday. He’d been practicing during the long hours in detention. As we arrived, the pastors were working on an email announcing that church would be cancelled for the next three Sundays. Pastor Janice made a video of our little skit that she’ll send out or post, ad hoc inspiration for all who will be enjoying a quiet Sunday at home.

We’ve even wondered about cancelling the little welcome party we planned for this evening. But you can’t stop African cooks once they get their minds set on a feast. Wednesday we did the planning. Yesterday we shopped with hundreds of other people who were stocking up, not for feasts but for future isolation.

So today we’re keeping viruses at bay by giving up hugs and handshakes and filling the air with fumes from onions and hot peppers. This may be our last social event for a while.

Except we’ve been planning to spend tomorrow celebrating grandson Ethan’s fifth birthday. I don’t worry about traveling a few hours in the car. Nevertheless, I’d be willing to risk just about anything for a few hours with the family.

Prayers for all who will suffer sickness, stress, or hardship during these challenging times. 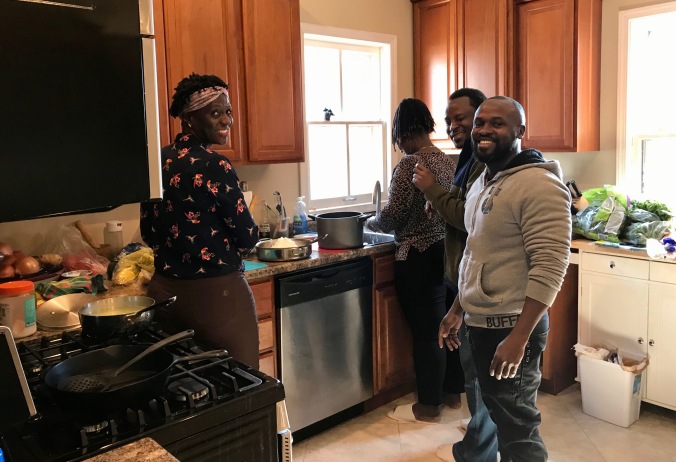 2 thoughts on “This was the week that was”