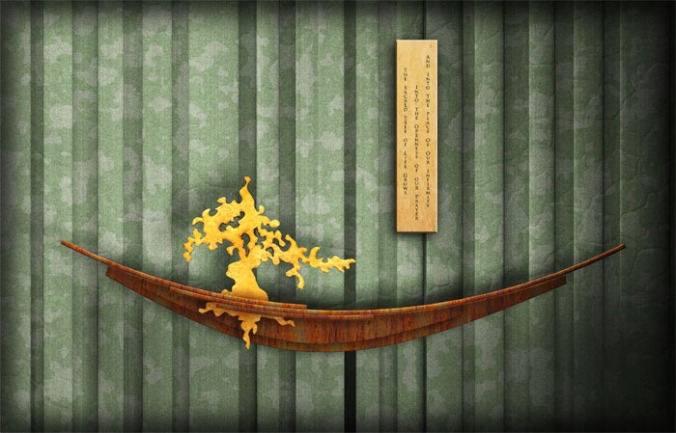 “I’m sitting in the Art Institute of Chicago café – getting around to telling you more about the Sacred Tree Project,” writes my friend, the fabulous sculptor/designer/craftsman David Orth on the site of his kickstarter project. It’s “a multicultural sculpture in steel, carved wood, gold leaf, papyrus, and ink.”

I have never seen a more gorgeous kickstarter project. I’ve pledged and urge you to do so, too. Consider $115 or more because the pendant that comes in at that level and above is to die for. But anything David makes will astonish you with grace and perfection.

I’m going to give the rest of this post over to David because this project is exactly what this blog is about and falls through some of the same cracks (“too religious for many, not religious enough for the rest.”) Here’s what he says, writing from one of my favorite places, too:

I taught design and sculpture here [at the Art Institute] a few times and I hate the reminder that they haven’t called in years. But this is still one of my best ways to spend a couple of hours – bouncing around between the African masks, the Japanese basketmakers, Van Gogh, the stone Buddhas, and that Eames Chaise lounge – thing.  I’m wearing five dollar boots from the local resale, but I feel insanely rich here – caught up in this wealth of diversity and depth.

I’m flashing back to a meeting I attended a year ago. For the strangest two hours this church was packed with Muslims, Christians, and Jews. They were singing their songs and playing their music for each other.  Then we all sang some ditty about love and faith – together.  I’m wearing the same damn boots and having that same uncanny feeling of wealth.

The old mystical Jews had this idea that vessels full of light, in some cosmic tragedy, were shattered into thousands of pieces. They said that our task now is to gather the pieces. In my mind, this gathering includes not just the old familiar traditions of East & West, such as my own Mennonites & Episcopalians – and the Buddhists I like to drop in on – but also the new Pagans (who seek to connect us back to the earth) and the Atheists (who wish we could be more honest and genuine). We need it all.

I’m rambling again. Starting to get sappy. A lot of suffering and rage going on right now, but I’m feeling something good coming on – like a slow train.  The Sacred Tree Project is a piece of it.  This project, dramatized in sculpture, gathers up spiritual threads and practical concerns from all directions, thumbs its nose at none, and invites the public into their own connection with the cosmos – with the divine – whatever you like to call it.  Today I’m calling it the Sacred Tree – a name all traditions have been comfortable with – for a long time.

So Here’s the Thing

Go to the project’s kickstarter site to learn more about the project, see more of David’s work, and pledge. Kickstarter projects accept pledges but you don’t pay up –and they don’t go anywhere–unless they are fully funded within a limited time. This one has only 34 days to go. Take a look.