These are the only notes I took on our conversation this morning with Garry Roberson, a local landscaper, because I quickly decided to trust his judgment on just about anything.

Garry is wiry, weathered. He is wearing jeans, a blue shirt with the sleeves cut off, and a straw hat. He talks the fast talk of an enthusiast.

I like everything he says about what he sees and how he works, because it is what my husband and I see, only more, and how we would work on our landscape if we had more time, energy, and skill. He, in turn, is impressed that I know every plant in our five acres of woods and what grows where.

Hiring Garry is like hiring a professional version of ourselves when it comes to enhancing the already beautiful land around our house. We’d like to be that good but we aren’t.

He says his goal is to make his work invisible. “You will look at the result and wonder how it could ever have been any different.” He encourages us to take lots of “before” pictures so we’ll see the difference.

Garry worked for our neighbors across the road. Trees screen our view of their house, so I was never aware that landscaping was being done until they put in a lovely pond and waterfall. And Garry’s gradualist approach meant that the transformation wasn’t sudden. We just noticed, after a few years, that their house and surroundings were looking really good. We noticed the “after” without paying attention to the “before.”

A little like my weight loss. Nobody told me I was fat before but some people now say I look good. (I know they are too polite to link “looking good” to weight loss unless I bring it up.)

My goal is not for people to say about our home, “I like what you have done to this place” but, “I like coming here. It’s so beautiful.”

They say that already. As Garry plays with our surroundings they may say it more and more. But we are really doing this for ourselves, in partnership with nature and a nature artist. Garry calls his business Earth Art.

Here are more “before” pictures . 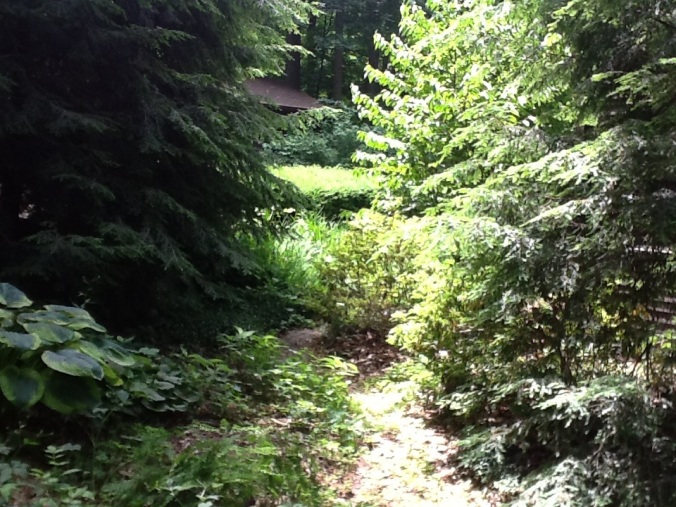 One thought on “Earth artist”