Around the edge what I feel is a loss of relationship, of possibility. I was not that close to Galen when we lived in the same household because he was one of the Older Boys. I was young when he left home and we have always lived more or less 700 miles apart since then so the relationship was different from what I have with the brothers whom I see more often. And then Galen and I had a habitual reserve around each other that I don’t fully understand. I was intimidated by him when I was young and something of that lingered. I fear that my reserve, as an adult, must have seemed like indifference and I am sorry for that. I couldn’t even hug him without feeling like I would break something fragile in him. He suffered from a whole constellation of ailments which he struggled mightily–heroically, even–to overcome, and I didn’t know how to relate to someone with that much pain and that much discipline. (He was doing squats, they say, in the hospital in his last days, and his lungs were so strong from cycling that they refused to give up as his pacemaker-assisted heart was losing the struggle. Do you know that when such a heart stops beating, the pacemaker must be stopped with a magnet?) His larger-than-life legacy as a physician, a father/grandfather/great-grandfather, and a man of many passions and hobbies was apparent in the affectionate, varied stories told during his memorials last week in Fargo, North Dakota.

But I allowed awkwardness to keep me at a distance from him in our adult lives except for a few times. I didn’t look hard enough for common ground. We shared a health disorder. We shared an interest in global politics. We shared faith but of very different expressions.

Most important, though, we shared an extended family that knew, loved, and respected each other, each single member. As far as I know, no relationships in our extended family have ever been broken for long. So that in the constellation of this family the bonds remain, even though any bond between individuals may, at any given time, be tenuous. The family holds. As one of my grandnieces said, “I have always known who my great-aunts and -uncles are, and who their children are, and the names of their grandchildren, even though we didn’t live close.”

When our mother was alive she kept the net together by hosting family gatherings.  Even after his death, our father has provided a kind of family glue because we trade stories about him, mostly far more negative than what the man probably deserves, but Life with Dad did give us common ground. In the decades that they have been gone, we have remained a family, with the adult and intergenerational relationships taking their own course, taking different forms, with bonds of different strengths, but leaving no one entirely outside the fold, although it is getting more challenging for everybody to know everybody. One of my brothers, knowing Galen’s health was fragile, made sure the sibs trekked to North Dakota last August so Galen could be included in a family gathering.

My brother’s death leaves a big hole in this net. Celebrating his life last week, we updated and renewed ties of affection. His wife, daughters, sons-in-law, grandchildren, their spouses, and their babies and toddlers will be held in the net of our family, as well as the embrace of the communities where they have made their homes. In my brother’s memory, I vow to keep reweaving the nets. 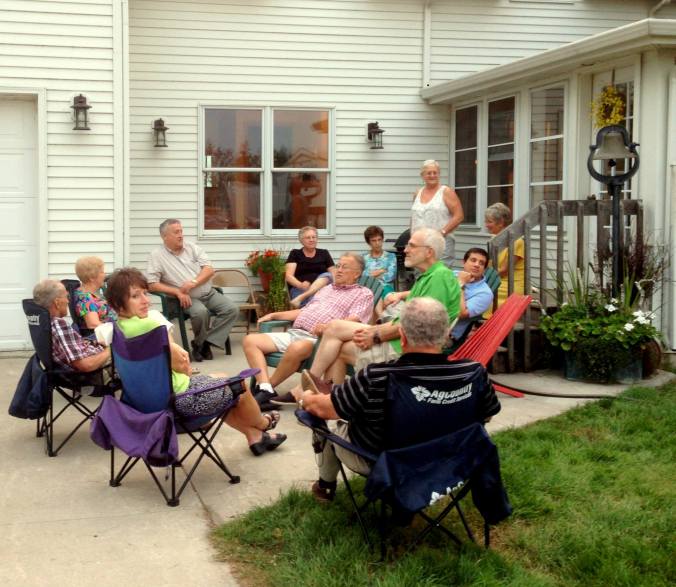 7 thoughts on “A brother’s death”