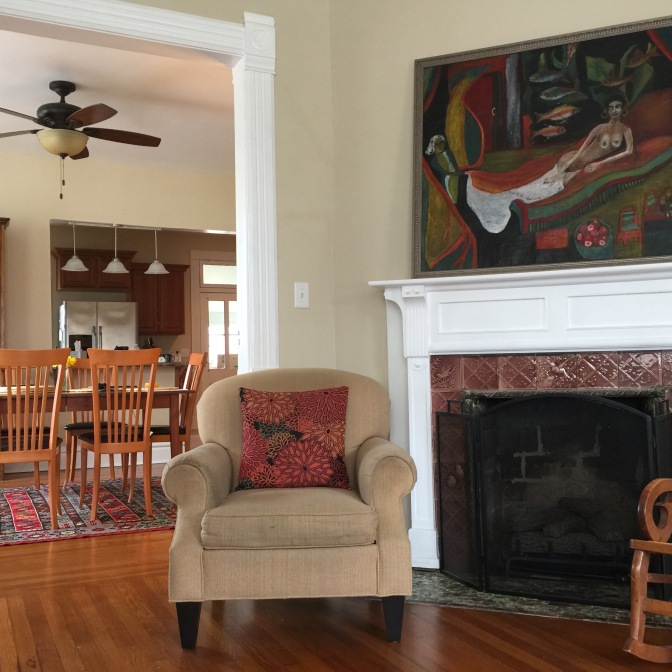 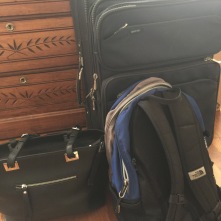 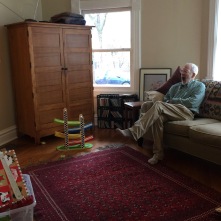 Today I took a break from unpacking boxes and moving furniture and packed my bags for Congo. I leave in three days.

We began moving into our new home nine days ago and yesterday it began to feel like home. Our daughter had played house, arranging furniture and rugs, and her husband had moved extra stuff and boxes upstairs, while Ethan, the two-year-old Entropy Machine, scattered cars, trucks, and improvised light sabers faster than we could collect and stash all the stuff of our existence. Hazel, 6, picked daffodils that popped up on a warm day and explored all the nooks and crannies. The house felt blessed and broken in by their presence.

Vic and I crashed yesterday afternoon after the little family left. We’d been going pretty much nonstop for a week. My knee was hurting again. Then we remembered that the furnace guy and the locksmith were coming today and we had a little work to do at the house in the woods so at 8 pm we went back there and cleaned the fridge and gathered the last bags of trash out of the garage. Bye-bye. We turn over the keys in two days.

I finish every day exhausted. Even the prospect of a 22-hour plane trip seems like a relief. Maybe I’ll be able to sleep this time? Probably not. But I’m happy for a break from the moving process. And now for something completely different. . . .

We got a lot of help from our friends on the Saturday that launched the move. A half a dozen people came and loaded most of our boxes and odds and ends in a U-Haul and vans. Others made food. (Sara’s cinnamon rolls are to die for.) Professional movers did the main move on Monday and we slept among the boxes Monday night. We learned that only one of three tub/showers produced hot water and the old-fashioned tub on the third floor, where I wanted a soak, didn’t have a drain plug. We are the first residents in this house after a rehab that took 17 years. The house inspector missed a few quirks like that.

This week friends who live nearby have dropped by several times without calling first. I want to encourage this. We haven’t really lived in a drop-in kind of neighborhood since decades ago in Africa. A few strangers have also dropped by. Some want work or money and I have to decide how to handle that. It’s been mostly cold and rainy so the immediate neighbors aren’t out and about much.

A woman who works in the hospital two blocks away told us she had watched this house being rehabbed and standing empty and fantasized about living here. “In my mind this has always been my house,” she said, “even though I knew I’d never own a home myself.” This might have been a friendship to cultivate but she was about to move to a retirement center in another city.

We haven’t gotten to the stage of putting pictures on walls but I have propped one of my favorites above the fireplace. These ladies have been in our bedroom and my study but now they are coming out to more public space. (Dear me, I hope our friends are not offended by nudes.)

I bought the painting from a folk artist in Moscow 23 years ago. At the time I identified with the mermaid-dreamer on the couch, floating among the dream fish. Now she may represent the spirit of this house, the Pink Lady. And I may be the little crone impresario, wanting to make magic happen. 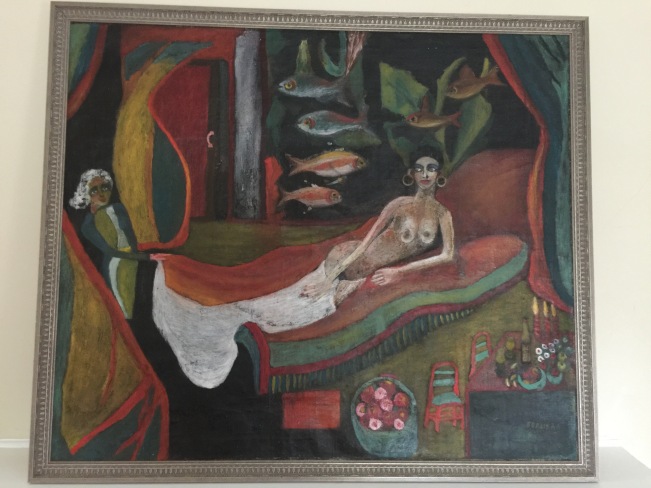