Several stories stick with me from my August trip to Congo. I didn’t write during the trip; there was just too much going on and not much solitude. So, like I do with a detailed dream of which I only remember a snippet, I will honor a few stories that have stayed with me. Here is one.

Three fellow travelers and I spent a full week in the dusty outback city of Tshikapa, in Western Kasai province, where the fourth teacher-training program, sponsored by the Mennonite women of Congo and Africa Inter-Mennonite Mission, was being held. Sixty-one people–many of them educators and pastors–were following an intensive course in teaching illiterate adults to read and write.

It was marvelous. It was rigorous. It went well.

Tshikapa is the provincial capital of the region that has suffered the most recent, excruciating violence in that country. I would not have gone to Tshikapa a year ago, but, by all reports, things had calmed down and it was safe both for foreigners and the workshop participants, who came from the far reaches of the region, to travel there.

On the first day I was greeted by one of the women who was part of the kitchen crew. She didn’t speak French. She drew a line across her throat repeatedly and rubbed her fingers together in the gesture that indicates a request for money.

With the help of some of her fellow workers I learned that her husband had been killed in the war–decapitated–and that she was now alone with nine children.

Many, many people ask for money in Congo, especially in a place like Tshikapa, where foreign visitors are rare. But where do start and where do you stop? It’s so arbitrary. So my first and usual response is no. I tried to communicate sympathy to this woman and told her there would be something for her at the end of the week. The workers are paid and we travelers usually add a substantial tip

But that was not good enough for the woman whose name was Patience but who might have been called Persistence. The next day she showed up with her son, Claude, a neatly dressed young man of about 20. He spoke some French. He’d had six years of school. She wanted him to tell me more of the story.

Claude said that his father, a policeman, had been called to help quell the unrest stirred up by the Kamwina Nsapu rebellion near the Angolan border at the end of 2016. News accounts verify that early in 2017 the rebels or local people–it wasn’t clear who–turned on the police, killing many and decapitating some.

Claude was carrying a battered electronic tablet. He said he was on Facebook and wondered if he could friend me. I said ok. He wanted to come back the next day to tell me more of the story. I said ok. I am a sucker for stories. I got a friend request that evening and accepted.

The next day Claude brought his equally well-dressed cousin, Damas, who had lived in the area where Claude’s father was killed. Although Damas didn’t have much to add to the story, I asked our interpreter, an earnest teacher called Mr. Paul, to join the conversation. Mr. Paul immediately elaborated on the suffering, atrocities, and animosities still fresh in the memories of the people of Tshikapa. Then he quizzed Claude and Damas on their present life. What were they doing to earn a living? How were they spending their time?

Claude said they played soccer. Neither had regular employment.

I asked how they managed to be so well-dressed and have electronic devices if they had no money? They grinned sheepishly and said sometimes they got some money by playing in soccer tournaments. It was clear, however, that not looking good was not an option for these young men.

Mr. Paul scolded them for wasting time on soccer and began dishing out suggestions for what they might do. How about buying a bundle of used clothes and reselling them? Buying a barrel of fuel and selling it in containers along the road? (There are no gas stations in Tshikapa.)

“That takes money!” the boys said. “We have no money!”

At that point some impulse prompted me to make a suggestion. It is the impulse that causes me to do at least one foolish thing on each trip to Congo, something that pushes the envelope of my personal norms.

I told the boys to come back the next day with a written proposal: what they wanted money for, how much, how they would use it, and how they would report to me on how they used it.

They looked at each other. That’s it? Just a written proposal? I said yes.

Still, I was a bit surprised when they came back at dusk the next day with a few scribbled lines. We would like $250 to buy fuel to sell, signed Claude and Damas

No mention of how they would report back to me. I asked them about this. Telephone? Claude said. Nope, that wouldn’t work. I suggested the obvious solution: Facebook. I want to see pictures on Facebook. Ahh! Okay! 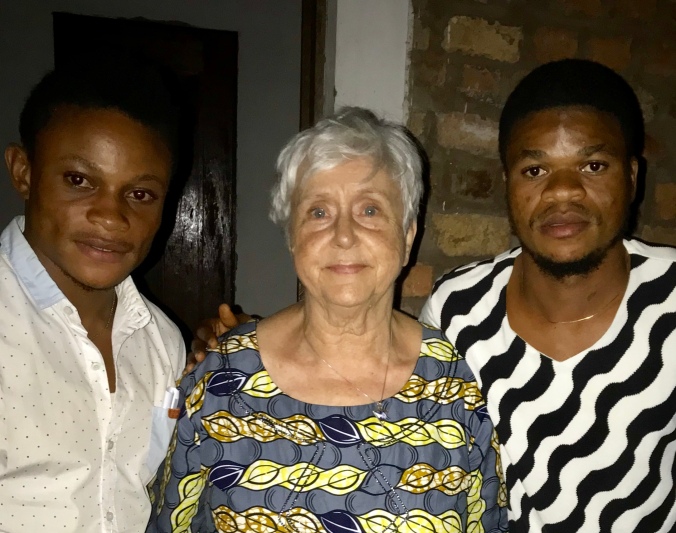 Here is how I figured. The worst that could happen is they would eat the money–spend it on food, beer, clothes, electronics. So, how many times over do I consume $250 without a second thought?

And the best that could happen is they would use it to start a little business to feed the family, put the younger kids in school.

Several days after I got home I got a “wave” on Messenger from Claude. It came in the middle of my night but I happened to be awake, so I sent back a one-word response: “Fuel?”

“Hello,” he said. “Yes, already. I have already bought fuel.”

And he sent this. 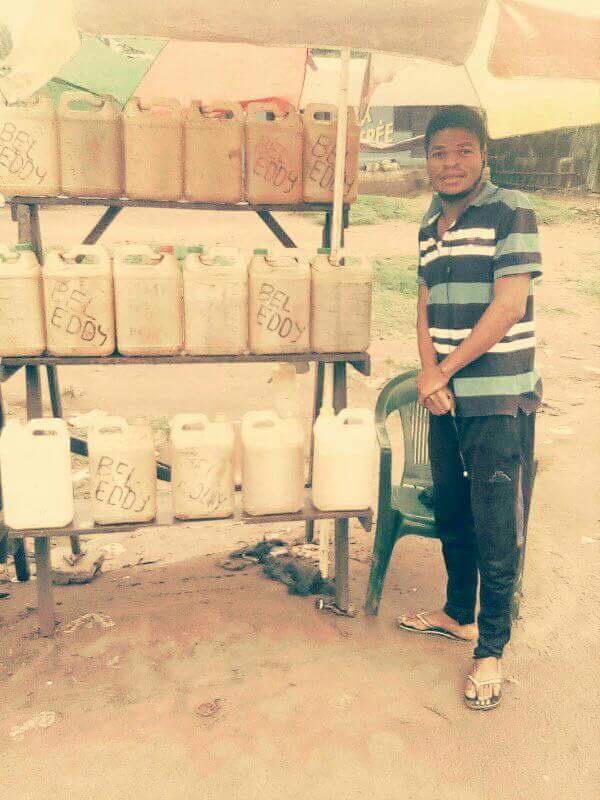 Now, it could be anybody’s rack of fuel containers and I have yet to hear how sales are going, but I choose to believe the best.

4 thoughts on “One foolish act”