I am just back from a 3-day Wisdom School on the Law of Three and I am seeing triangles everywhere.

Law of Three, in the Wisdom tradition of Christianity, is the theory that the most basic, most pervasive dynamic of life is a triangular dance among three kinds of forces: FIRST FORCE– affirming (positive, active); SECOND FORCE—denying (negative, passive); and THIRD FORCE—reconciling (neutralizing, transforming, catalyzing … etc.). The first two forces may end up in opposition but Third Force is present (though hidden) in the stalemate, and when it comes into play, change happens. Something new arises. Still, all three forces are necessary for that to happen.

This waltz is how things evolve on every level, from the subatomic to the universal. It is in the very nature of God (think Trinity as process more than persons). It operates at the level of the individual human psyche and in our interactions with each other.

“Law of Three” has been, for me, the most difficult-to-grasp concept in the Wisdom tradition. Cynthia Bourgeault’s book, The Holy Trinity and the Law of Three, is a tougher read than most of her other writing. But it is smooth sailing (to use a Law of Three metaphor) compared to the Gurdjieff-ian, Needleman-ish Boehme-ic expositions of this concept, which seems to invite the most abstract, exotic, intellectually elevated sort of thinking, while also claiming justifiable resonance in the ways of the heart and the workings of the body. And so the terminology can be awkward and the concept itself tends to slip—or dance—out of your grasp, just when you think you’ve gotten a handle on it.

But it seems to offer so much—not only a grand Theory of Everything but also a powerful self-help, group-help tool. After all, if you can just discern that Third Force present in any personal or social logjam you can potentially ride it down the flowing River of Life until you hit the next evolutionary snag. And then do it again. And again and again and again.

So I was looking forward to Marcella Kraybill-Greggo’s first-ever Wisdom School on the Law of Three, which, she promised, would be an embodied experience of the Law of Three. How about that? Forget theory, pretty much, and dance it out. What a concept!

It took some getting used to. At the beginning, my head wanted more theory, or better theory, clearly explained. But something happened during the first Interplay session, when we left words behind altogether. I noticed that many of my movements embodied Second Force—“Holy the Denying,” as Marcella would say. I’d been thinking some critical thoughts throughout the morning and, sure enough, in the afternoon play I was moving in the opposite direction from everybody else, cutting in front of people, playfully bumping against them. It cleared my head and opened my heart!

The small-group session that followed demonstrated the power of this kind of pattern recognition in solving problems and finding personal life paths. The aha moments, when the one presenting a personal dilemma got a whiff of Third Force, provoked tears and laughter in equal measure.

That night in my wakey-wakey hours I started seeing triangles everywhere. I thought back on my recent experiences with women in Congo developing, together, a program to turn out a new cadre of adult literacy teachers. We have watched the project ignite tremendous energy in its participants—leaders, new teachers, and new learners. I have experienced the thrill of allying with what I now recognize as Third Force. We have seen how Second Force obstacles were necessary, how new realities have arisen, and new First Force passions are pushing in new directions.

In the light of day that idea seemed both presumptuous and too limited. (Holy Spirit? God? is in all three forces, surely.) For a moment I thought I saw in the Congo story an elegant progression as the three forces and the new arisings shifted to different places on the triangle. I remembered reading something about that in Cynthia’s book. But when I checked the relevant passage I couldn’t quite fit my experience into the theory, which is still dancing just beyond my grasp. This first Law of Three school left me wanting to know more about how it all works beyond the very personal level.

Still, Law of Three is probably better learned by practice than theory. It has become a new spiritual practice for me, which I will follow both on my own and in concert—dance—with others. 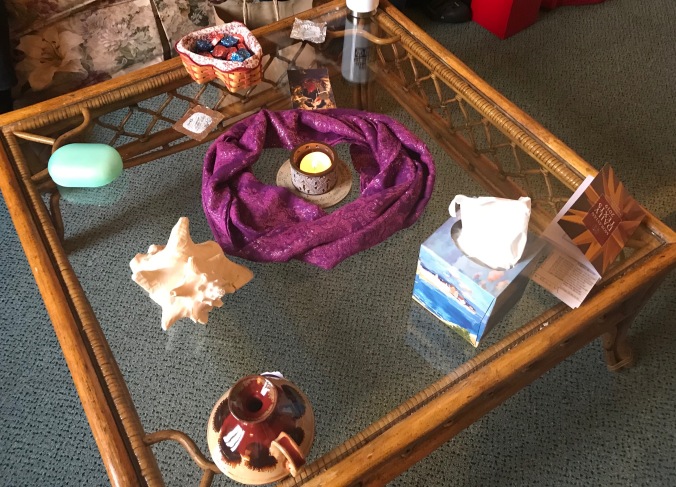 The candle, tissues, and chocolate are pretty obvious but how did our small group’s altar end up including a lamp, a shell, and a bar of soap? Wouldn’t you like to know!

2 thoughts on “Waltzing the Law of Three”