There are a lot of Democratic candidates for president in 2020 so it should not be surprising that one of them is my neighbor. He used to live about a 5-minute walk from my house but recently moved just across the river.

What is surprising is that this neighbor may actually be the best of the lot. I don’t know if my husband would agree yet; he is slower than me to make up his mind about just about everything. And just because I’m for this person doesn’t mean he’s going anywhere. My favorites tend not to get too far, let alone win. The exception was Barack Obama, who also happened to come from the neighborhood where we lived for a while, in a different city.

I can’t say that I know Mayor Pete Buttigieg of South Bend, Indiana, personally, but I know a lot of people who do and I have seen how he operates close up. Still, I have been surprised and enlightened by what I see of him on the national stage and in the media since he announced his exploratory run for the presidency a few weeks ago. He’s impressed me and a lot of my Facebook friends and friends of friends. Whoa. This guy can think and talk at the same time.

I do think he’s ready for the national stage, even after only running a city of 100,000 for 8 years. This summary of his recent appearance on the CNN Town Hall gives a good sample of how he approaches knotty national issues. You will get a chance to judge for yourself because he recently topped the DNC’s 65,000-donor requirement and will appear in the candidate debates. He’s now at 76,025 according to today’s email. Mayor Pete likes to be precise in his numbers.  365,812 potholes patched, 141 lane miles paved. . . . 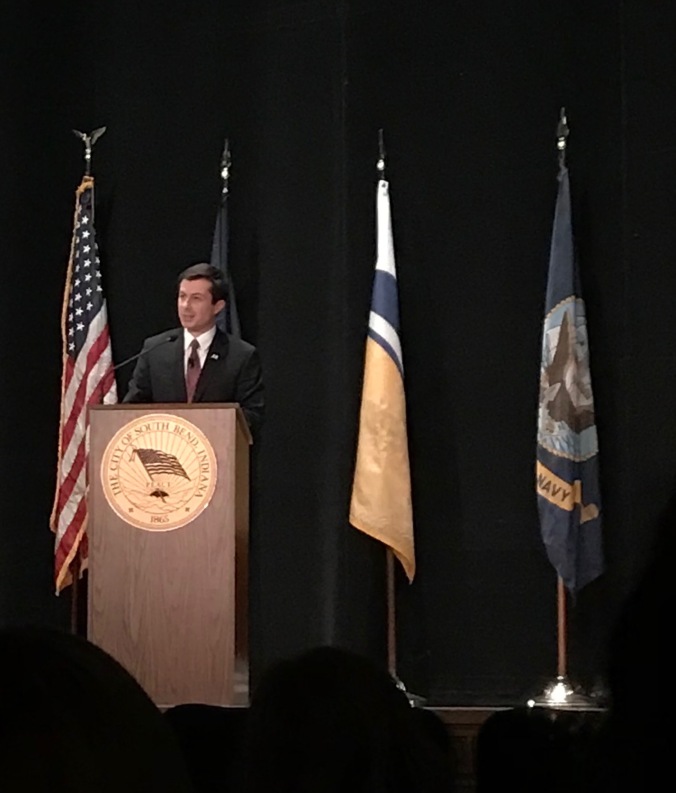 State of the City address, March 13

But he’s more than a numbers nerd. He is a visionary and uniter; he gets things done. I do not worry about Pete Buttigieg keeping track of the big international picture as well as myriad details of complex issues and policies. My main criticism is that he sometimes moves too fast to bring people along in the way you need to, even—especially—in a small city. He’s got energy to spare and that’s not a bad thing but it can get leaders into trouble. So when he makes mistakes he tries to correct them but trust is not always won back quickly.

What I see in Mayor Pete more than in any other candidate is a combination of integrity, intelligence, energy, and articulate thoughtfulness that makes for inspiring leadership. I went to his final State of the City address a few nights ago, along with hundreds of others who were, like me, attending this annual event for the first time. At the end of the speech he said that what gave him the greatest satisfaction at the end of his tenure as mayor was something for which he couldn’t take full credit: that South Bend, which had been written off as a dying industrial city, was now a city that believed in itself.

This is true. It is one reason we moved here two years ago. It was not only because the city had a dynamic mayor, but because a lot seemed to be happening on many fronts, especially at the neighborhood level. Many of us will be sorry to lose Pete as our mayor but the renewed energy doesn’t depend on one person. What is visible here is a kind of contagious, even contentious, inspiration (my word for the year). People care about the city and are willing to fight for what they see needs to be done, whether or not the mayor says so. That power to open people’s eyes as well as the conversation is an important ingredient of leadership.

I like the kind of leader who, on the occasion of the first Friday prayers after the terrible massacre in New Zealand, sends a condolence letter to the South Bend Muslim community saying our city values and needs them. (This evening my husband and I plan to attend an interfaith memorial service at the local mosque.)

By the way, in South Bend we don’t bother much with Mayor Pete’s last name. Buddha-judge? Boot-edge-edge? I’ve always heard it as boot-a-judge and thought of all the judges who really should be booted. “President Pete” has a nice ring. And it doesn’t seem to have mattered a whit in this Catholic city that he is gay.

A weird linguistic side note. “Buttigieg,” which is Maltese, translates roughly to “lord of the poultry,” according to Politico. When we were in Zaire in the 1970s we heard that the full name adopted by then-President Mobutu (Mobutu Sese Seko Kuku Ngbendu wa za Banga) literally meant “powerful rooster who left no hen intact.” What is it about chickens?

More press on Pete and his TedX talk:

4 thoughts on “My neighbor is running for president”