I’m doing better now that I’ve come to terms with the dark cloud hovering over my head: my late mother and my own mortality. Still, there are days when I can’t do more than one or two things. The weather is that cold-rain, almost-snow deep fall gray more typical of November than October and I literally feel “under the weather” a lot of the time. Sad weather weighs me down. I hibernate and don’t get enough exercise. A head cold threatens despite daily doses of immunity boosters.

But today I made a rather momentous decision. Maybe that is my one thing for today because decisions can be taxing, right? So maybe I can curl up with an entertaining book and drink hot chocolate the rest of the day.

The decision was a joint one with my husband though I was the mover on it because I move faster in decision-making than he does. And we considered it over the past eight days and consulted other people and there was some agonizing and second-guessing. But now that it is done, I feel good about it and look forward to what unfolds because of it.

We have decided to sponsor and host an asylum-seeker.

I don’t know how much I’ll be able to write about it here because social media exposure can be dangerous to political refugees. But I think I can say that our refugee will be an African man who is in detention until the conditions can be met for his parole. One of the conditions is having a sponsor to provide the basic necessities of life through the asylum approval process of six months or so. This is what we have agreed to do.

When we bought the Pink Lady nearly three years ago I hoped we might be able to do something like this, given the three extra bedrooms with ensuite baths. On the other hand, I also wanted to keep two bedrooms open for times when both our children would visit, with their families, at the same time. As for the third bedroom, which is a semi-apartment (no full kitchen) on the third floor, soon after our move we rented that out to a graduate student who came to us through a mutual friend.

But our children’s busy schedules mean that they seldom visit us together. Our son has hosted us all for both Thanksgiving and Christmas the last several years because he has to work around the holidays. So the two bedrooms on the second floor are usually empty. And our grad student is away for a term abroad, returning mid-January, and will finish his studies in May, so that area, too, is now vacant and will be occupied only for a few more months.

Perhaps it was these temporarily empty upper floors that prompted me to take a second look at the call that came in last week for housing and care for this group of asylum seekers whom someone from an active immigrant-supporting network in our city had encountered on a visit to the border. What also caught my attention was the fact that some of the refugees were from Democratic Republic of Congo. If you read this blog regularly you know that I know my way around DRC and have a lot of heart invested in that country.

When I inquired I learned that all the DRC refugees in this group have been placed, but by that time the idea was already growing on me.

Okay, I’ve had lots of second thoughts, too. We value our quiet home life with only temporary interruptions by noisy grandkids, houseguests, dinner parties, hospital helicopters, and the occasional neighborhood crime or mishap. The grad student has been an ideal tenant when he is here because we hardly ever see him: he leaves early and works late and is away on weekends. Are we ready to give regular attention to someone who might require lots of care and feeding? I don’t worry too much about cultural differences but I don’t like to be pinned down to cooking every day to suit someone else’s tastes. And I like to be able to be idle for long stretches of time like today–reading, browsing the internet, meditating, napping–without feeling like someone is watching me because then I feel guilty about being idle. I don’t like to make conversation all the time. Boundaries are important.

Discussions have made it clear that our friends and church are available to help us bear any psychic burden, maybe even financial. There is evidently a good local support network of experienced sponsors who will provide referrals for the services needed by refugees. More important, several members of this group of refugees who have been in detention together are already placed in this city. They will continue to be important support to each other.

But the best revelation came as I was looking again at the brief bios of the asylum-seekers who might be linked to us. One especially stood out. He seemed not only to be an interesting person—anyone who gets this far through a daunting process is pretty interesting—but also to have a professional background and aspirations to which I, especially, can relate. A colleague, a collaborator. Something might come of this connection.

I don’t know if I will be able to say more as time goes on, but I am looking forward to this venture. Meanwhile, it turns out that the whole family plus the in-laws from Taiwan will be here for Thanksgiving. I don’t know if we’ll have our refugee by then but I’m sure we can find a place for everybody. 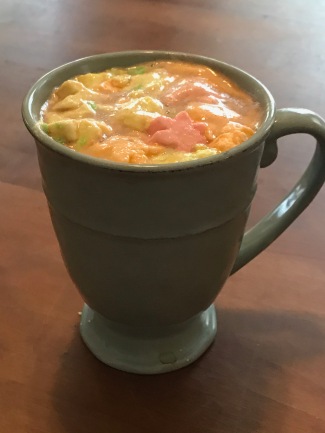 Now for some hot chocolate with marshmallows.

11 thoughts on “A momentous decision”